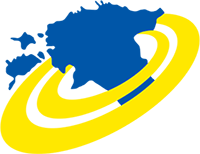 Estonia is situated in North-Eastern Europe, on the eastern coast of the Baltic Sea. To the north it is bordered by the Gulf of Finland, to the west by the Baltic Sea, to the east by Russia and to the south by Latvia.

The shortest route from Russia by sea to China and also to Western Europe and North America is through the Baltic States.

The Estonia-Russia border is only 250 km from Paldiski South Harbour and 200 km from Muuga Harbour by rail. While the closest Finnish port to Finnish – Russian border is 400 km from it. Our port links by road, rail and sea within 24h, 48h and 72h respectively reach to a potential market of around 50 million, 100 million and 450 million customers.

Estonia is a sea country – the length of the coastline (3794km) is about 6 times longer than the mainland borderline. Therefore shipping has long traditions and is well developed. Estonia’s sea transportation system is also connected to that of the other European ports.

Estonian ports have been developed eventually into the successful hubs for handling of transit and export and import goods and have a good track record of high quality services.

Port of Tallinn is the biggest European Union port in the Baltic Sea region. There are daily passenger and cargo ferry links to Finland and Sweden, as well as frequent cargo lines to Russia, Latvia, Poland, Denmark, Germany, Netherlands, UK, etc. Port of Tallinn handled roughly 7 million passengers in 2006 and ranks second in the region.

PROLOG is a vital link between the Estonian SCM community and SCM professionals worldwide. Through global marketing actions the Association assists its members in developing their businesses in target markets. It provides the so-called all-in-one service – the customer can simultaneously find overviews, business contacts and support.

PROLOG actively expands cooperation between the leading SCM associations, research companies and universities all over the world. Useful and topical information about the world trends, new innovative ideas and best practices is mutually shared.

PROLOG is a vital link between the Estonian SCM community and SCM professionals worldwide. Through global marketing actions the Association assists its members in developing their businesses in target markets.